An story I wrote long time ago. Now is in the machine, a little of my childhood memories.

When my aunts were overburdened with housework and the children seemed like flies buzzing around them, my aunt Yady came up with the most exiting of her ideas.

“Let’s go and decorate the old pine.  It’s almost Christmas!” she said with her childlike smile.  My sisters, my cousins, and I followed her to the left side of the garden where a ten-foot pine tree stood proudly against the early summer’s breezes.

“First, I need someone to climb the tree.”

“Me!”  “Me!”  “Me!” we said almost in unison.  She hesitated for a second looking at the swaying branches.

“No, I better do it myself.  You can pass me the decorations.”

We decorated the pine with big Christmas balls of red, green, and gold.  She even put a big star that year. Under that tree, my cousins, my sisters, and I spent uncountable sunny afternoons playing with Barbies, sometimes sticking each other by surprise with its pointed leaves, or throwing the tiny pine cones to each other as snow balls.

The next March, the beginning of the Panamanian school year, the pine waited for us with its warming welcome shade.

Sometimes at siesta time, I overheard my aunt Jady, whispering with my big sisters and older cousins, inside of one of the bedrooms.

“Go play outside.”  She said to me softly, soon as she saw me.

“Shoo!  We’re talking,” screamed my big sister, waving me away with her hand.  However, a few minutes later I came back with my cousin Imelda.  Hiding behind the door, we listened to them talking about boyfriends, and kissing on the mouth.

“Yuck!  That’s gross!  Said my cousin and we burst off laughing and running away.

My aunt Jady was in her early twenties and planned to marry at the end of that year her boyfriend, Constantine.  My aunts and my grandmother were up and down planning her wedding while they spent their evening visits, swinging in the hammock making string of farts competitions and laughing a loud.

I heard them from somewhere else, wondering if I one day I could share such intimacy with someone.

The months passed and our beloved evergreen pine tree started to die.  Its once strong trunk began to peel off and dry.  At the same time,   my aunt Jady began spending awful lot of time at the hospital.  We were not allowed to visit her.  The house, once filled full of joy and laughter, became cold and silent with only whispered conversations between the adults.  I eaves dropped on those conversations, making myself invisible to the grown ups.  I heard one day, “Your sister needs a bone marrow donor, and even if we find one, how will we manage get the money.”  Sniffled my Abuelita,* with her handkerchief in one hand.

“We’ll manage.”  Said my uncle Santos.  He was one of the few who could cash a check under Noriega’s dictatorship in those days.  My aunts and my grandma wanted to believe him.  The past Christmas, he had managed to get grapes, apples, and pears.  These were prohibited gringo* fruits.  The Colonel (Norieiga) was staring to loose it and wanted the Panamanians’ Christmas dinner to be only a bowl of plantains, bananas, oranges, mangos and more plantains.

“My uncle will manage.”  I believed.

My aunt Jady spent most of her time on bed resting when she was home.  We sat on the floor watching TV, quietly while she drifted in and out.

“What are you watching?”  She said drowsily.

“Thunder Cats.”  We said, excitedly telling her what the cosmic cats were up to. She scowled at us.

We changed the channel to a Japanese cartoon called, “Candy.”  She smiled.

One evening my aunt Jady was getting ready to go to church.  She looked herself at the mirror.  Putting on one of her crochet caps to hide her thinning hair, she looked into Imelda’s eyes.

“Good aunt, but put some more color on your cheeks.”

“That’s why I’ve always like kids… they always say the truth.”  She said gazing off into space.

Silently in a corner, far behind her I could see her image and mine in the mirror.  She wore a turquoise cap that complimented her brunette skin.  I remember her small dark eyes, her large mouth, and her big white smile.  She had a slim body with a narrow waist and wide hips.  She was not more than five feet tall.

October arrived with its heavy rains and dark spooky nights.  My aunt had been in the hospital about a month, but today she was coming home.  The house had been turned upside down preparing every tiny detail.  Aunt Jady arrived at my grandma’s house on a sunny morning.  She was in a casket wearing her wedding dress; she seemed peaceful like a sleeping fairy.

Men carried her casket to the church.  It was about a five minute walk from the house.  We followed.  For first time in the history of Anton, the cities Catholics put their differences aside and stepped inside a protestant house of worship.  The Evangelic church overflowed with people.

After the eulogy, men took turns carrying the coffin on the forty-five minute walk through the center of town toward the cemetery.  My cousin Elda and I were leading to procession, carrying bouquets of fresh white flowers.  The people walked slowly talking among themselves.  The sun was hot, and we soon forgot the rhythm of the march.  When we looked back, we were twenty feet ahead of the crowd.  We walked backward giggling in embarrassment.  We had hoped no one noticed, but we were too late.  I could feel on my back the evil looks from all of my aunt’s eyes.  I was, after all, two years older than Elda, and supposed to behave.

“Why?! Cried my grandma, “Why God doesn’t take me instead of her.”

She grabbed the coffin and seemed to faint.  A group of women came to her rescue.  Soon she recovered and continued the slow walk across the narrow streets of my small town.

I never had seen such a large crowd before.  “My aunt had more friends that I could possibly imagine.”  I though.

That day people gathered around the house drinking coffee until late at night.  There were murmurs of discontent about Grandma’s decision not to follow the nine nights of funeral awake, as is the catholic custom.  I kept myself silent, sitting on the floor by the entrance door, with my arms around my knees.  My tired abuelita* passed by.  “Can you come to bed with me?”  I was frightened; my late aunt had slept in that bed!  However, I could not refuse.  I gazed at my cousins and my big sister gathering quietly under the mango tree. At the other side of the patio, my other sister sat in the dark staring at the stars.  I remember unknown relatives looking at me weirdly.  I remember an empty house full of people.

Christmas came and went with no celebrations to remind us of her.  No lights, no decorations, no Christmas tree.  It continued that way for a while.  When my aunt Rosa had her children, she resumed the task.  The enchantment of the Holiday season came back one more time at my grandma’s house.

"My work, it’s my life, an open book with a twist."MAyra EStela View all posts by Mayra Moreno

This site uses Akismet to reduce spam. Learn how your comment data is processed.

Go All the way 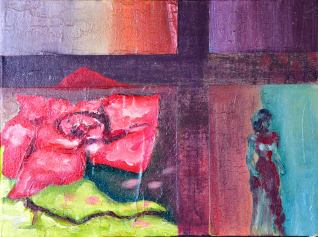